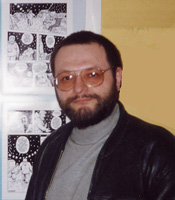 Born in 1965 in the city of Dzerzhinsk (Nizhniy Novgorod region), Russia.

First cartoon was published in the newspaper “Moskovskiy Komsomolets” in 1983.