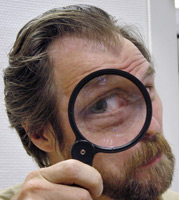 Was born in 1960, 11th of May, Moscow.
In 1985 graduated from Moscow State Pedagogical University, Faculty of Graphic Arts.
The first caricature was published in the paper “Moskovskij Komsomolets” in July, 1977.
The winner of “Moskovskij Komsomolets” paper caricature competition in 1981.
A participant of many Moscow and international caricature exhibitions.
Took part in preparations for and carrying through the Summer Olympics in 1980 and the World Festival of Youth and Students in Moscow, 1985 as a graphic designer.
From the beginning of 1986 and up to the end of 1987 was travelling across West Syberia (from Sverdlovsk to Krasnoyarsk), working as a painter of the komsomol campaign train “Molodogvardeyets”. In 1987 arranged a touring caricature exhibition onboard. Demonstrated a personal exposition of graphics and caricatures within the festival of friendship between the Soviet Union and India.
In 1988 was the chief artist of the soviet delegation during the festival of friendship between the Soviet Union and North Korea in Wonsan. Was published in the national press, for example in: “Smena”, “The Soviet Union”, “The Journalist”, “Krestyanka”, “Ogonek”, “ProSPORT”, “Otdohni”, “Izvestiya”, “The Soviet Russia”, “Komsomolskaya Pravda”, “Trud”, “Literaturnaya Gazeta”, “Sobesednik”, “Krokodil” (2006-2007 editions). From 1987 to 1990 was working as the artistic director of the journal “Smena”.
From 1990 to 1994 was the chief artist of “The Sobesednik” paper.
Participated in development and worked as the chief artist of the following editions:
Weekly publication “Superman”, monthly publications “Orakul” and “Nezrimaya sila”, in the journals “Design illustrated”, “Fly&Drive”, “Travel+leisure”, “Auto motor und sport”, “Bolshaya Politika”. In 2005 arranged a personal exhibition of caricature and graphics in the exhibition hall “Maryino” in Moscow.
In 2007 was a co-author of the caricature exhibition “Caricature as a presentiment” (together with Valentin Druzhinin and Oleg Loktev), that took place at the exhibition hall “Ulitsa Ogi” on Petrovka street.
The chief artist of “Sovershenno Sekretno” (Top secret) paper.
A member of the International Federation of Journalists.