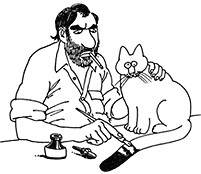 Bernard “Hap” Kliban (January 1, 1935 – August 12, 1990) was a cartoonist born in Norwalk, Connecticut.
Kliban studied at Pratt Institute but left without graduating and spent time painting and traveling in Europe before moving to California, where he lived in the North Beach section of San Francisco with his first wife Mary Kathleen (M. K.) and his daughter Kalia. M. K. was a noted cartoonist in her own right as M. K. Brown and chose many of the cartoons that appeared in his publications. It was while living in North Beach that “Hap” Kliban began to draw cartoons for Playboy magazine. The income fromPlayboy provided financial security that allowed him to move his family to an old house in the town of Fairfax in Marin County.
In 1962, Kliban became a Playboy cartoonist, contributing cartoons until his death. He is best known for the book Cat, a collection of cartoons about cats drawn in Kliban’s distinctive style. The cat cartoons were discovered by Playboyeditor Michelle Urry and the 1975 book Cat was born. This led to several other books of cartoons ending with Advanced Cartooning in 1993. Since Cat, his cartoons have adorned many products including stickers, calendars, mugs, and t-shirts.
The books that followed Cat consisted mostly of extremely bizarre cartoons that find their humor in their utter strangeness and unlikeliness. Many of these are cartoons that Kliban drew for Playboy. They often contained dysmorphic drawings of nude figures in extremely unlikely environments, as if to spoof Playboy’s own subject matter. Another frequent subject of satire were the type of wordless, step-by-step visual instruction manuals typically found with such things as office furniture. Kliban also had a recurring series of drawings called “Sheer Poetry”, in which the page would be split into six panels, containing images of objects whose names, when spoken in the order presented, would form a rhyming, nonsensical verse.
Bernard Kliban died at UCSF Medical Center aged 55 of a pulmonary embolism; he had undergone heart surgery there two weeks previously. He was survived by his second wife, Judith Kamman Kliban (who later married actor Bill Bixby shortly before Bixby’s death in 1993), brother Ken of New York City, and two daughters: Kalia from his first marriage, and Sarah from another relationship. 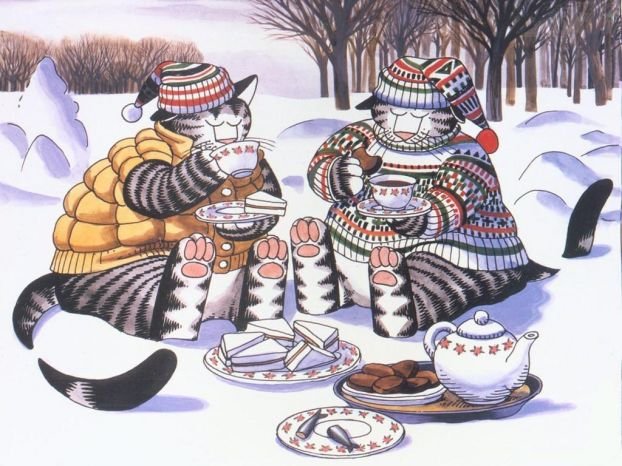 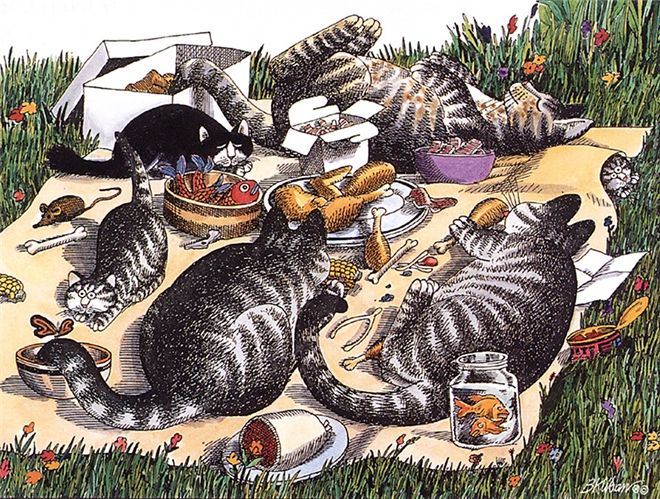