He is one of the most popular artists in Norway. Kittelsen became famous for his nature paintings, as well as for his illustrations of fairy tales and legends, especially of troll.

Kittelsen was born in the coastal town of Kragerø in Telemark county, Norway. His father died at an early age, leaving a wife and eight children in difficult circumstances. Theodor was only 11 years old when he was apprenticed to a watchmaker. When at the age of 17 his talent was discovered by Diderich Maria Aall, he became a pupil at Wilhelm von Hanno’s drawing school in Christiania (now Oslo). Because of generous financial support by Aall he later studied in Munich. Already in the first period of stay in Munich, he is interested in such genres as a caricature and animals, thus paving the way to a mature creativity. However, in 1879 Diderich Aall could no longer manage to support him, so Kittelsen had to earn his money as a draftsman for German newspapers and magazines.

In 1882 Kittelsen was granted a state scholarship to study in Paris. In 1887 he returned to Norway for good. When back in Norway, he found nature to be a great inspiration. He spent the next two years in Lofoten where he lived with his sister and brother-in-law at Skomvær Lighthouse. Kittelsen also started to write texts to his drawings here.

Theodor Kittelsen and his family settled in a home and artist studio which he called Lauvlia near Prestfoss during 1899. Kittelsen spent his best artistic years here. During this period, Kittelsen was hired to illustrate Norwegian Folktales (Norwegian: Norske Folkeeventyr) by the Norwegian folklore collector Peter Christen Asbjørnsen and Jørgen Moe. In 1908 he was made Knight of the The Royal Norwegian Order of St. Olav. However, he was forced to sell and leave Lauvlia in 1910 as his health began to fail. He was granted an artist’s stipend in 1911 but died a broken man in 1914.

Kittelsen’s style could be classified between Neo-Romantic and naive painting. As a national artist he is highly respected and well known in Norway, but doesn’t receive much international attention, which is the reason that his name is often not included in registers of internationally recognized painters and artists.

Lauvlia, his home from 1899-1910, is located north of Prestfoss along Route 287, with scenic view of Lake Soneren. The surrounding area, in particular Mount Andersnatten which overlooks the lake a few kilometres north, inspired some of Kittelsen’s most famous landscapes. Today Lauvlia is a private museum featuring an exhibition of Kittelsen’s original work. Lauvlia is decorated with Kittelsen’s own woodcarvings and murals. A new exhibition of original Kittelsen works is opened each year with painting and drawing activities arranged for children. The paintings exhibited are rotated each year.

The national Th. Kittelsen Museum at Blaafarveværket is at the Skuterudhøyden ridge by the Cobalt Mines. Th. Kittelsen’s poetical interpretations of nature, the forest, the mountains and trolls are presented in the form of carved furniture, oil paintings, watercolours and drawings. New exhibitions each year. In 2014 are Blaafarveværket in charge of arranging the biggest exhibition held ever in modern times.

The house were the artist grew up in Kragerø is also currently a museum devoted to his legacy.

Black metal and folk metal bands such as Burzum, Empyrium, Otyg and Satyricon have used some of his pictures as album art, notably illustrations taken from Kittelsen’s book Svartedauen (The Black Death). 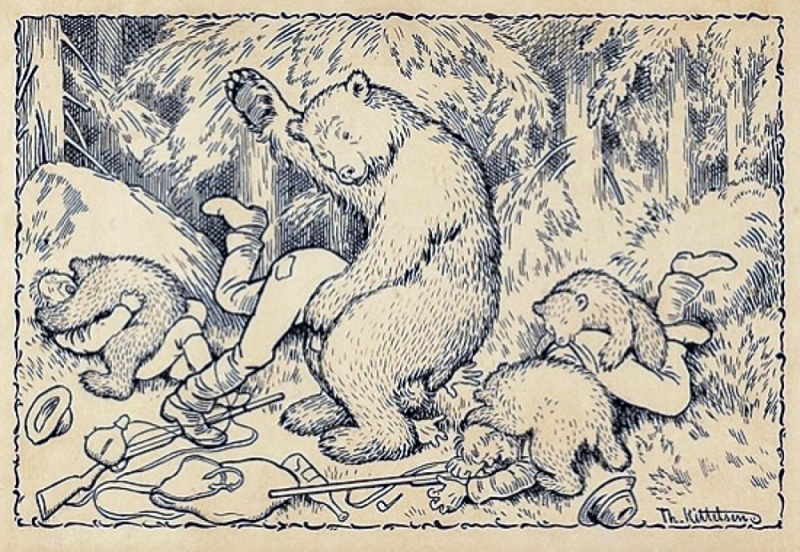