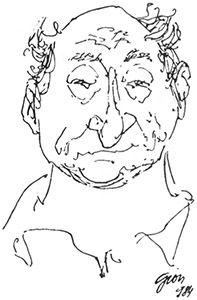 He was born in 1917 in Kiliya-Veke, Romania. Graduated from the Nicolae Grigorescu Fine Arts Institute in Bucharest. In 1947 made his debut as a cartoonist in the newspaper “Romania Libera”. Later he edits a regular rubric “Point over i” in the same newspaper. He participated in numerous exhibitions in the country and abroad, where he received various awards. Was awarded the prize of the press in Knokke-Heist in Belgium. He released several albums of cartoons. Constantly published his works in the press.
Member of the Union of Artists of the RAF.