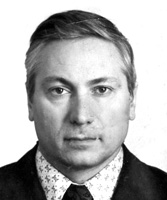 He was born on January 21, 1935 in Moscow.
In 1952 he graduated from school No. 110 with a gold medal, in 1957 graduated from the Stankoinstrumental Institute with a diploma in mechanical engineering. He worked as an expert at the plant, then at the Design Bureau and at the Research Institute.
Since 1962 he has been engaged in caricatures professionally. For three years he conducted a department of humor and foreign satire in the magazine “Rovesnik”. Participated in different exhibitions. His works were published in “Ogonyok”, “Komsomolskaya Pravda”, “Rossiyskaya Gazeta” and other central newspapers and magazines. In 1965 he became the chief artist of the youth magazine of the Central Committee of the Komsomol “Modelist-Designer”, where he has worked for 24 years and 6 months.
Acquaintance with foreign satire and humor inspired him to write the first script for the television humorous program “Kabachok 13 chairs” (unfortunately, TV editors R. Gubaidulin and A. Koreshkov never mentioned this during the anniversaries of the program).
After retiring in 2005, Kashirin continued his successful cooperation with publishers and printing houses, bearing in mind the statement of the philosopher Julien de Falkenar: “Humor does not solve any problems, but it helps to solve them.”
Member of the Creative Union of Artists of Russia.