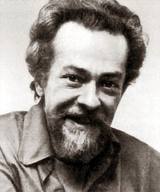 Born in St. Petersburg, Florida
Science fiction and fantasy writer
Founded the Gandalf Awards and the Swordsmen and Sorcerers Guild of America which awarded them
Published over fifty books, many short stories and edited numerous anthologies
Most well known for his Thongor and Callisto series and his Conan books written in collaboration with L. Sprague De Camp
Real name: Linwood Vrooman Carter

He was twice married and twice divorced with the first marriage lasting barely a year.
His work was very derivative.
He was egotistical and self promoting to the point of making himself the hero of one of his books.
He was an alcoholic and a heavy smoker.
His pen names included HP Lowcraft and Grail Undwin.
He started but didn’t finish several multi-volume series.
He never won a major award for his work.
The only works of his to be filmed were the episodes he wrote for the Spiderman cartoon from 1967 to 1970.

He served in the US Army during the Korean war.
He was highly respected as a critic and editor.
He worked hard to bring many forgotten authors such as Lord Dunsany back into the public eye.
He did an excellent job in editing many sci-fi/fantasy anthologies.
He was an excellent poet.
He made no attempt to hide his tendency to imitate other writers, seeing nothing wrong with imitating a writer an author liked.
Though little remembered now and often criticized, he was very popular in his time.