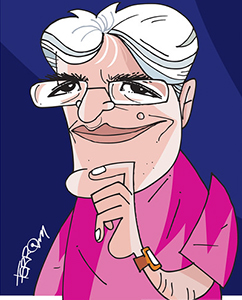 Born in 1960 in Hunedoara. He started drawing and publishing cartoons in 1979.
Qualified as engineer.
He is now the General manager of CRISAN Publishing House.
He displayed his works in more than 325 International exhibitions in 37 countries. AWARDS: He won 80 prizes in 16 countries.
A sponsor of Caricature Magazine & HumoDAEVA International Cartoon Contest.
A Member of the Romanian Artist’s Union (U.A.P.).
The first Romanian cartoonist who started drawing P.C. GRAPHIE’s.
Eight of his books were published.