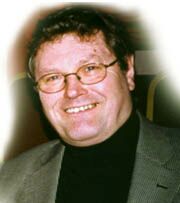 Born in Weston-Super-Mare, Somerset on 6 February 1942, Clive Collins studied graphic design at Kingston School of Art in 1958, and worked in marine insurance and as a film extra before helping to run a film studio. He then repped for a small artwork studio, and in 1964 began contributing to Punch, before becoming in 1969 editorial and political cartoonist on the Sun, alongside Paul Rigby.
In August 1970 Collins left the Sun to become the first ever political cartoonist on the People, signing himself “Collie.” These ended in 1971, but he continued to provide single gag cartoons for the paper until 1999. In 1971, on the death of Gordon Hogg, he also returned to the Sun to become “Lucky Jim”, a cartoon racing-tipster. During the same period Collins was also stand-in cartoonist for Franklin on the Sun and for Jak on the Evening Standard – adopting the pseudonym “Ollie” for his Evening Standard work during the Falkands War. Collins was voted Cartoonist of the Year by the Cartoonists’ Club of Great Britain in 1984, 1985 and 1987.
Collins left the Sun in 1982, and in 1985 he left the Evening Standard to become deputy editorial cartoonist, under Griffin, on the Daily Mirror, remaining until Griffin left for the Express in 1996. He was also sports illustrator for the Daily Mirror’s Mike Langley column from 1991 to 1996. In 1985 Collins began illustrating the Reader’s Digest ‘Buy-Lines’ advertising feature, and he contributed regularly to the relaunched Punch from 1996 until its demise. He has also contributed to the Shell UK house magazine, Mail on Sunday, Sunday Express, Oui, Mad, Odds On, Sporting Life, Squib, Printing World, and Playboy (USA). Other work has included occasional copywriting, scriptwriting, audio-visual work, greetings card designs, live and studio caricature work, and animation storyboards.
Influenced by Giles, Starke, George Price, Charles Addams, R. B. Wilson and George Booth, he is a particular admirer of Charles Grave. In his work on paper Collins draws roughs in pencil, then works with a 0.3 Pilot Marqueur Ã Dessin, using a Speedball A5 pen to ‘heavy’ the lines if required. For expansive line work he uses a 00 sable brush, gouache colours or inks, and Rotring black. However, he now works mainly with aid of a computer.
Collins was appointed MBE for “services to art” in the Queens Birthday Honours 2011.