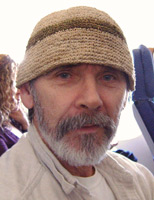 Was born on September 26, 1947 in Russia. Graduated from the Theatrical and Artistic Technical institute in Moscow, Russia in 1974. My major field of study was make-up. I had been drawing since the mid 1960’s and had participated in a number of exhibitions in Moscow beginning in 1972. In 1972, while I was still a student, I began to contribute cartoons to the Moscow-based, nationwide newspaper “Uchitel’skava Gazeta” (“The Teacher’s Newspaper”). Later on I contributed to or worked at other media such as “StroiteTnaya Gazeta” (“The Construction Newspaper”), “Vozdushnvi Transport” (“Air Transport”), “Trud” (“Labor”), and “Sotsialisticheskava Industria” (“Socialist Industry”), which in 1990 became “Rabochaya Tribuna” (“The Worker’s Podium”).
Following graduation, I took my first full-time position at Central Television in Moscow, where I worked as a Director’s Assistant from 1974 to 1978.
In 1978 I designed and put together a prototype of a new Soviet newspaper which was called “Air Transport”. I worked on the newspaper until 1982 as a cartoonist and an artistic editorial advisor. The paper had a nation-wide circulation and appeared three times a week.
I received an award from the publisher, “Moskovskava Pravda”. for my work on this prototype design.
From 1982 to 1985 I worked as a cartoonist and artist for “Izvestiya” Publishing and “Trud” (“Labor”), a daily newspaper with nationwide circulation. “Izvestiya” Publishing is the publishing house of the Peoples Congress and was and is the second largest publishing house in Russia and the former Soviet Union. It publishes the second largest circulation national newspaper in Russia as well as books, tracts and other publications. While in that position I took over the presidency of the Cartoonists Club at “Izvestiya” Publishing, which was sponsored by “Izvestiya”.
In 1985, I moved to “Pravda” Publishing, which was at the time the largest publishing house in Russia and formerly the USSR, and worked primarily at Sotsialisticheskava Industriva (Socialist Industry). At the time, Pravda published the largest circulation newspaper in Russia as well as books, tracts and other publications. There I organized the Cartoonists’ Club and served as its President. I received an award from the publishing house for my work in organizing and developing the Cartoonists Club and also served as one of the two in-house cartoonists who worked on two national newspapers. In that role, I was able to solicit and select cartoons from all over Russia and other republics to present to the editorial board each week for inclusion in publications. I was also selected to work as an artist/consultant for conducting a competition for cartoonists under the name of “A Perestroika Primer” and to organize from the Soviet side a U.S./U.S.S.R. Cartoon Exchange which toured the United States in 1988 and 1989.