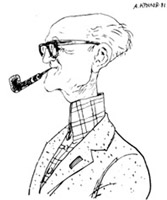 Born in Riga, studied at the Academy of Fine Arts, did not graduate. While still at the institute, he began to draw cartoons for student anti-fascist leaflets. During the Second World War, he fought at the front and worked in a regimental newspaper. Before Stalingrad, he fought in intelligence – he was a translator, then he was seconded to an army newspaper, an artist. He finished the war on the Kursk Spit, then served in Vilnius, then moved to Moscow.After the war, for many years he collaborated with the Crocodile magazine and other periodicals.

Participant of many All-Union exhibitions of satirical graphics.

Was born in 1913. Studied at the Riga University, fthe Faculty of Architecture. Drew his first caricatures for illegal anti-fascist leaflets published by progressive Latvian intelligentsia.
In 1940 took part in the opening of famous Soviet “Crocodile” magazine in Latvia. It was here when his outstanding skills as a draftsman were manifested; Iorsh finally becomes a satirical artist and now openly, with enthusiasm, started drawing caricatures.
He went on front at The Great Patriotic War, went through contusion, hospital, work in the regimental newspaper. After the War he worked in the national media, magazine “Dadzis”, scourging the warmongers of the “cold war”, the reactionaries of all stripes. And continues cooperating with the magazine “Crocodile”.
He participated in many all-Union and international exhibitions of satirical graphics. Many of his works werr awarded with honorary diplomas. Even today his drawings are constantly published in many periodicals.
Died in the 90-s in Moscow soon after the death of his wife Zinaida Matveevna whom he loved a lot. They have supported each other until the end.

“Masters of the Soviet Caricature” 1983