Was born on June, 10, 1963 in Moscow. Graduated from Moscow Engineering and Construction Institute, Faculty of Hydraulic Engineering (1986), later – Institute of Distant Studies of Culture , Faculty of Painting (1991).
Worked at the factory, at the construction site, later – in the newspaper “Evening Moscow” as an illustrator, the head illustrator. After that came to advertising. Since 2008 – a free artist.
His first caricature was published in the newspaper “Moskovsky Komsomolets” in 1977.
Contributed to the newspapers “Moscow Komsomolets”, “Evening Moscow”, magazines “Crocodile”, “Journalist”, etc.
In 1988 had a personal exhibition of cartoons in the House of Journalists.
Organizer and participant of contemporary art exhibitions.
Member of the Club of cartoonists of the newspaper “Moskovsky Komsomolets”, “The club of the young cartoonist” of the magazine “Krokodil”, comics studio “COM”.
The artist of the advertising agency “Clayborn Creative Consulting”, head of the creative group.
Engaged in comics, easel painting and graphics, curator of exhibitions of contemporary art.
Repeated prize-winner of the comic book festival “Commission” (Moscow). 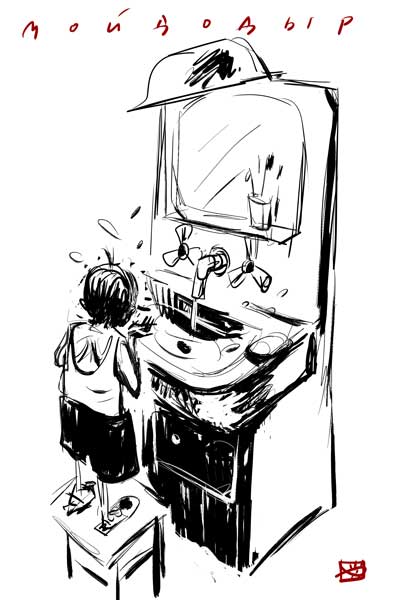