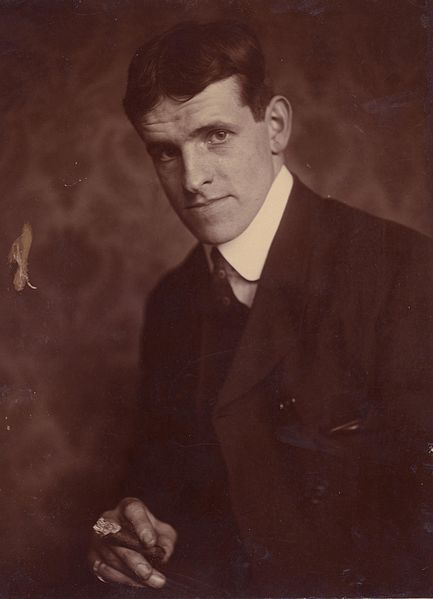 Yeats was born in London, England. He was the youngest son of Irish portraitist John Butler Yeats and the brother of W. B. Yeats, who received the 1923 Nobel Prize in Literature. He grew up in Sligo with his maternal grandparents, before returning to his parents’ home in London in 1887. Early in his career he worked as an illustrator for magazines like the Boy’s Own Paper and Judy, drew comic strips, including the Sherlock Holmes parody “Chubb-Lock Homes” for Comic Cuts, and wrote articles for Punch under the pseudonym “W. Bird”. In 1894 he married Mary Cottenham, also a native of England and two years his senior, and resided in Wicklow according to the Census of Ireland, 1911.

From around 1920, he developed into an intensely Expressionist artist, moving from illustration to Symbolism. He was sympathetic to the Irish Republican cause, but not politically active. However, he believed that ‘a painter must be part of the land and of the life he paints’, and his own artistic development, as a Modernist and Expressionist, helped articulate a modern Dublin of the 20th century, partly by depicting specifically Irish subjects, but also by doing so in the light of universal themes such as the loneliness of the individual, and the universality of the plight of man. Samuel Beckett wrote that “Yeats is with the great of our time… because he brings light, as only the great dare to bring light, to the issueless predicament of existence.”[3] The Marxist art critic and author John Berger also paid tribute to Yeats from a very different perspective, praising the artist as a “great painter” with a “sense of the future, an awareness of the possibility of a world other than the one we know”.

His favourite subjects included the Irish landscape, horses, circus and travelling players. His early paintings and drawings are distinguished by an energetic simplicity of line and colour, his later paintings by an extremely vigorous and experimental treatment of often thickly applied paint. He frequently abandoned the brush altogether, applying paint in a variety of different ways, and was deeply interested in the expressive power of colour. Despite his position as the most important Irish artist of the 20th century (and the first to sell for over £1m), he took no pupils and allowed no one to watch him work, so he remains a unique figure. The artist closest to him in style is his friend, the Austrian painter, Oskar Kokoschka.

Besides painting, Yeats had a significant interest in theatre and in literature. He was a close friend of Samuel Beckett. He designed sets for the Abbey Theatre, and three of his own plays were also produced there. He wrote novels in a stream of consciousness style that Joyce acknowledged, and also many essays. His literary works include The Careless Flower, The Amaranthers (much admired by Beckett), Ah Well, A Romance in Perpetuity, And To You Also, and The Charmed Life. Yeats’s paintings usually bear poetic and evocative titles. Indeed, his father recognized that Jack was a far better painter than he, and also believed that ‘some day I will be remembered as the father of a great poet, and the poet is Jack’. He was elected a member of the Royal Hibernian Academy in 1916. He died in Dublin in 1957, and was buried in Mount Jerome Cemetery.

Yeats holds the distinction of being Ireland’s first medalist at the Olympic Games in the wake of creation of the Irish Free State. At the 1924 Summer Olympics in Paris, Yeats’ painting The Liffey Swim won a silver medal in the arts and culture segment of the Games. In the competition records the painting is simply entitled Swimming.