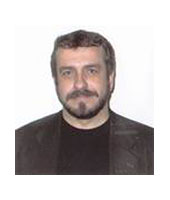 He was born on February 21, 1964 in the Ukraine. In 1983 he graduated from the Kirovograd Engineering College.
In 1994 he graduated in Journalism from the Kyiv State University.
He began publishing his cartoons in media in 1987.
His works were published in the periodicals such as the Peretz (Pepper), Krokodil (Crocodile), Vozhyke, Chayane and in an other newspapers and magazines of the Soviet Union.
He took part in more than 400 international contests and cartoon exhibitions in the USA, France, Belgium, Sweden, Italy etc.

Since 1996 he is an editor in chief of the Shapoklyak children’s satirical newspaper (Minsk).
He is a member of the Ukraine Cartoonists Association.