American cartoonist and author born in Areola, Illinois, in 1880. Johnny Gruelle began cartooning in Indianapolis, Indiana, and after the turn of the century drew children’s fantasy strips for small syndicates, where he created some of the most wonderful fantasy the comics have ever known. In 1910 he won a $2000 prize offered by the New York Herald and had a comic strip, Mr. Tweedeedle, accepted; it ran until 1921.
In 1912 he created the Yapp’s Crossing series for Judge. Running weekly, a full page in the front of the magazine, the series concerned the doings of small-town folk during celebrations, holidays, events, etc. The whole town was portrayed from an angled bird’s-eye view. With minor recurring characters, the series became immensely popular and spawned imitators (Eugene Zimmerman and Tony Sarg adopted the genre well); it ran in Judge until 1923. Gruelle imitated himself and ran the Yahoo Center series in Life and the Niles Junction adventures in College Humor.
Gruelle’s biggest success was his Raggedy Ann series, which included cartoons he illustrated himself. He had specialized in children’s stories in such magazines as Women’s World, but his Raggedy Ann stories about dolls and toys that come to life are all-time classics of children’s literature. The very conceptions are as brilliant as the cartoons, which are often in color. A whole series of books was produced which continue to be just as popular today, with much ancillary merchandising (particularly the Raggedy Ann doll itself), in the traditions of other children’s fantasy classics like The Wizard of Oz and The Brownies,
Gruelle’s son, Worth, became a cartoonist and switched assignments with Harry Neigher on the Bridgeport (Conn.) Herald in the 1930s; much of his work consisted in taking old Yapp’s Crossing drawings and writing local captions and labels. Johnny Gruelle retired from Norwalk, Connecticut, to Miami Springs, Florida, where he died on January 9, 1938. (His Western comic strip, Brutus, which he had started in 1928, died with him.) 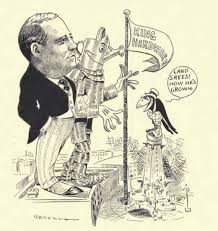