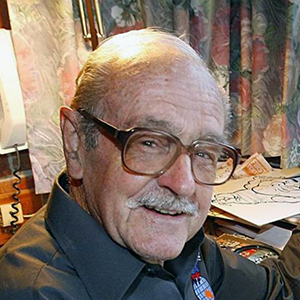 Australian cartoonist born at Essendon, Melbourne, Australia, in 1923.
A visiting cartoonist from England recently remarked in Melbourne how appalled he was at the quantity of work demanded from Australian cartoonists in a week, stating that no cartoonist working in Britain would stand the pace. Among others working in Australian journalism, John Jensen’s reference was of course to artists like William Ellis (‘‘Weg”) Green of the Melbourne Herald. He has been producing, together with other work, 11 joke ideas and drawings every week for 23 years.
Green has a declared disinterest in political cartooning, valuing his independence rather than accepting and expressing the editorial line of a newspaper. He saw one well-known cartoonist destroyed in this way. and that is not for him. His real interest is in social comment: with Weg, humor comes first, but he is adamant about sound drawing.
Weg started with the Herald after leaving the army (he served in New Guinea with an army intelligence unit drawing maps and general cartographic work on active service) and after studying drawing at the National Gallery School in Melbourne. Sam Wells, the Herald’s political cartoonist, recommended Weg to do the leader page cartoon while Wells was on holiday. Green’s work impressed the staff, and an invitation to join the paper followed during June 1947.

In October 1949, his regular daily feature, Weg’s Day—a single-column drawing wittily commenting on current news items—appeared on the front page of the Herald and has continued to appear daily since that time. Weg was also required to illustrate feature articles, design headings for feature departments and draw caricatures of politicians, sports figures and other personalities.

His popular pocket cartoon had been running for just under four years when, in March 1953, a new feature that made his pen name a household word all over the state of Victoria was introduced into the Herald columns. This was the brilliant Weg’s Weekend, a six-cartoon panel satirizing people and events in the news, at homo and abroad, and displayed across the top of a broadsheet page and to a depth of six inches or more. Weg’s drawing is broadly comic and wholly original, with only faint echoes of his earlier admiration for the work of William (“Wep”) Pidgeon. Drawing with pen, ink and brush, Weg condemns the modern trend of drawing with pen-tel-type pens, which cannot give sensitivity or quality of line to drawings.

The wonderfully funny drawings by William Green are the work of a thoroughly professional artist, a gently mannered and articulate craftsperson concerned for the future of Australian cartoonists, resenting foreign influences and domination-in terms of the threat imposed from syndicated material dumped less expensively upon the market. Although Weg has illustrated several books, no collection of his cartoons has been published. 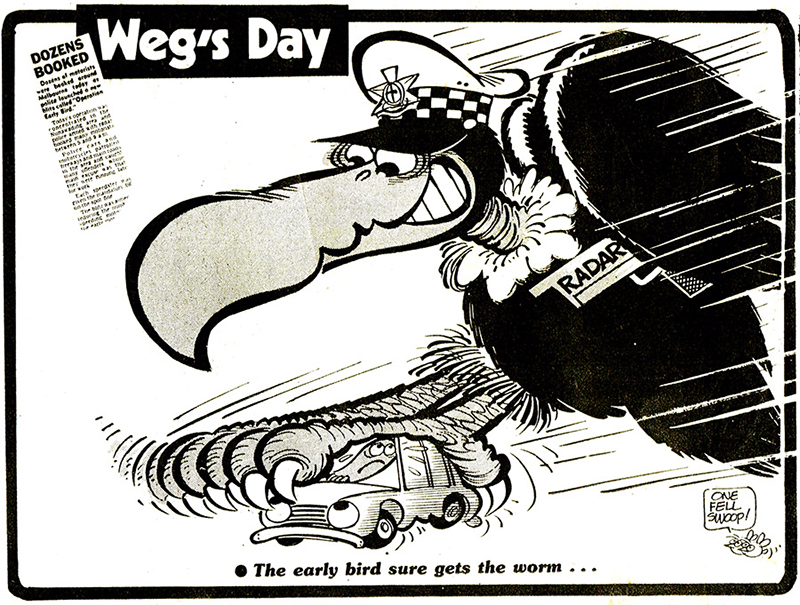