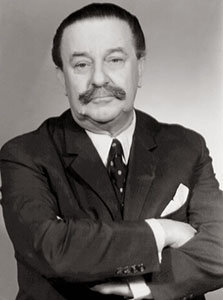 Adolf Hoffmeister (Prague, 15 August 1902 – July 24, 1973), caricaturist, illustrator, publicist, poet, travel book author and Czech diplomat. He was a librettist for Hans Krása’s children’s opera Brundibár, which was performed many times by children in the Theresienstadt concentration camp. Before, he had collaborated in the founding of Devetsil, avant-garde association of the early twentieth century, in Czechoslovakia.

At the outbreak of World War II, he was exiled to the United States, where he published articles against fascism and political caricatures. There he also wrote “The Flute of the Blind”, about the Czech village of Lídice, razed by the Nazis.

After returning to Czechoslovakia, he held high positions in the new communist regime. In 1968, after the invasion of the Soviet troops and the end of the Spring of Prague, it moved away definitively of the political and social life.