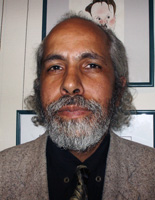 Born in Havana, Cuba. He graduated from the San Alejandro Art College in Havana in 1973 and the Surikov Moscow Art Institute in 1985. His first cartoon was published in the Juventud Tecnica magazine in 1972 where he worked as an artist then. Also his works were published in the magazines as Palante, DDT, Literary Gazette, Vokrug Smeha, Krokodil.