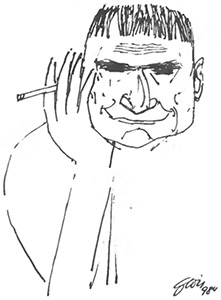 He was born in 1929 in Krakow. Graduated from the Nicolae Grigorescu Institute of Fine Arts in Bucharest. He worked as a graphic artist in the Tribune Romania magazine. Since 1949 he contributed his works to the Urzika magazine. He published his satirical drawings in the magazines like Contemporanul, Gazeta Literare, Luchafarul, Saptzmina. He illustrated books of Rabelais, designed posters, theatrical scenery and costumes. He is a member of the Artists Union of the RAF.

A series of Masters of the cartoons of socialist countries (Soviet Artist), 1986