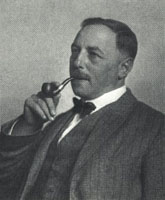 Thomas Theodor Heine (28 February 1867–26 January 1948) was a German painter and illustrator. Born in Leipzig, Heine established himself as a gifted caricaturist at an early age, which led to him studying art at the Kunstakademie Düsseldorf and, briefly, at the Academy of Fine Arts in Munich.[1] In 1896 he became successful as an illustrator for the satirical Munich magazine Simplicissimus, for which he appropriated the stylistic idiom of Jugendstil and the graphicqualities of Henri de Toulouse-Lautrec, Aubrey Beardsley and Japanese woodcuts.[1] The illustrated critiques of social orders, and the monarchy in particular, that he made for the magazine led to a six-month prison sentence in 1898.[1] He also began work as a book illustrator in the 1890s.