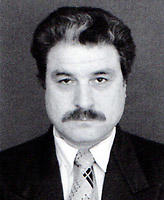 He was born in Gadabay region in 1947. He graduated from the Technical School of Arts in 1968. In 1977 he finished the course of the Azerbaijan Journalist Mastership. In 1980 he started to work as a cartoonist in the republican press. He has been contributing to the Kirpi (Hedgehog) satirical magazine since 1981. He takes part in many republican and international exhibitions and competitions. He is an art director of the Mozalan (Gadfly) satirical magazine since 2005. Since 2006 he is a member of the Azerbaijan Cartoonists’ Union. He is a member of the Azerbaijan group in FECO (Federation of Cartoonists Organisations).