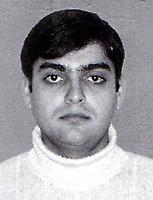 He was born in Baku in 1982. He graduated from the A. Azimzadeh State School of Arts in 2000.
Then he graduated from the Azerbaijan State Academy of Arts in 2004.
Since 1997 he has been working as a cartoonist in many newspapers and magazines in Azerbaijan.
His works have been published in several books and albums.
He successfully participated in many international competitions held in the Republic and abroad.
Since 2006 he is a member of the Azerbaijan Cartoonists’ Union. He is a member of the Azerbaijan group in FECO (Federation of Cartoonists Organisations).
2007