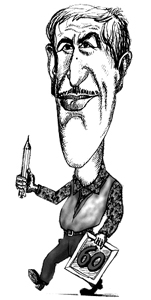 He graduated from the A. Azimzadeh State School of Arts in 1971.
Then he graduated from the Tbilisi State Academy of Fine Arts in 1982.
He is a member of the Azerbaijan Artists Union since 1978.
He has been working as an art teacher since 1982.
He is a chairman of Baku Equilibrist Club from 1984.
His book “Azerbaijan equilibrist“ was published in 1989.
He won awards and diplomas in the republic and international contests.
He took part in contests which held in Turkey, Iran, Belgrade, Poland.
He is a member of Azerbaijan Cartoonists Union from 2006.
He is a member of Azerbaijan group in FECO (Federation of Cartoonists Organisations).