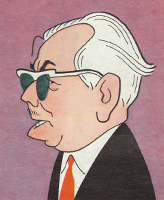 Yuliy Ganf was born in the city of Poltava. He studied in the Art Shop of Eduard Steinberg in 1917–1920 and in VKhUTEMAS (The Higher Artistic and Technical Shops) in 1922–1924. In 1920s, he produced political caricatures for Moscow-based magazines and newspapers: Krasny Perets, Bezbozhnik, Krokodil, Pravda, illustrated books published for Detgiz (The State Publishing House of Children’s Literature of the Ministry of Education of RSFSR). He was the author of many political slogans in 1930s. In 1945, he was granted the title of Honoured Artist of RSFSR, and in 1964 was named a People’s Artist of the USSR. In 1970, he was awarded the golden Fighter for Peace medal at the International Exhibition “Satire in Fight for Peace”. Yuliy Ganf died in Moscow.