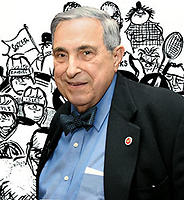 American cartoonist born in New York City on December 28, 1922. Bill Gallo is of Spanish, not Italian, descent, as is often erroneously assumed. He started publishing cartoons while still in high school. In 1942 he joined the Marine Corps and served for more than three years. After an honorable discharge, Gallo attended the Cartoonists and Illustrators School (now the School of Visual Arts) and Columbia University on a CI scholarship. But, as he himself stated, “most of (his) education came from the New York Dailу News.”

Gallo had joined the News even before entering the Marine Corps, and he has remained with the paper to this day. After doing various cartooning and art jobs at the News, Gallo became its standby sports cartoonist and later its regular sports illustrator, after Willard Mullin’s partial retirement in the late 1960s. In addition Gallo also draws an occasional editorial cartoon, and in the early 1970s he created Basement Bertha, a Sunday half-page with a sports theme (Basement Bertha was originally Casey Stengel’s most loyal and vociferous fan in Gallo’s cartoons about the New York Mets).

Bill Gallo has received many cartooning and sports awards, including several Page One awards and National Cartoonists Society Best Sports Cartoonist awards. He was president of the NCS from 1973 to 1977.