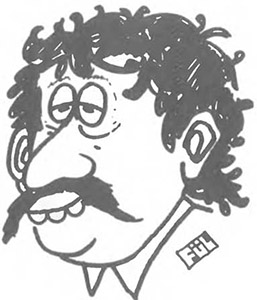 He was born on January 19, 1923 in Debrecen in a Jewish intelligent family. His father was a rabbi. Already at the age of 12, his compositions and poems appeared in children’s magazines. In 1944, he was sent to work in a labor camp. His younger brother Tibor, who was barely 17 years old, voluntarily went to work for a bowl of soup a day. György Fülep experienced an extraordinary childhood and life in the Budapest Ghetto (Budapest District VII / Budapest gettóban – was an institution and a place of forced residence created during the Salasi government for the separation and concentration of a significant part of the capital’s Jews). In 2006, he wrote a book called “The Extraordinary Era” about his experiences here. Despite the many horrors and shocks, it is a miracle that for more than 35 years Ludas Matiihe had a colleague who was full of humor. That’s what he said himself:

“I was a journalist. I went into humor because I thought that these terrible things that I remembered – my mother, my brother were killed by the Nazis, my father went to Israel – could be forgotten… but they cannot be forgotten!”

He graduated with a scholarship to teach Hungarian history at the university, but he never taught outside of the mandatory probation period. Later he became a journalist. He worked in the Debrecen newspapers (“The Diary of Haidu-Bihari”, “The Debrecen Neplap”).

He started drawing in “Free Youth” in 1954, and at that time he also appeared in a joke called “Dongo”. Being a rural journalist, he repeatedly sent articles to the editorial office of “Ludas Mati”. Laszlo Tabi, the editor-in-chief of the newspaper, liked his work. Thus, he joined the number one satirical newspaper in the country, first as a temporary, and since 1961 as a permanent employee.

“Ludas wasn’t a funny place at all. The atmosphere was more dramatic. The party committee kept us under strict supervision. We always heard from them: “Don’t laugh at yourself!” This is a strange requirement for a satirical publication.”

Versatile, humorous poet, cartoonist. He consciously trained himself as a cartoonist because the standards were high. Laszlo Tabi often asked himself this question, since two large groups of editorial staff were writers and artists, that is, cartoonists, and Gyorgy Fulep had a talent for both. He worked at the newspaper until 1990. His drawings have been published in many.

He was one of the founders of the newspaper New Ludas, but it operated for only two years and ceased to exist in 1992. Then he drew for the Lord and Jokes about Pests. He also worked at the short-lived, newly launched Ludas Matyin between 1996 and 1999 .

As a pensioner, he wrote and illustrated books.