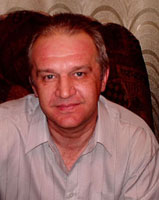 Cartoonist
He was born on December 7, 1956 in Komsomolsk-on-Amur. He started publishing his works in the early 70’s in Voronezh.
In 1978 he won an award in the contest in the Krokodil magazine. The cover image on his theme was drew by the National Artist of the USSR Ivan Semenov. For this drawing I. Semenov was awarded with the prize of the year.
In 1982, Ermilov won the First place in the Funny Marathon cartoon competition organised by Soviet Warrior magazine.
At various contests he won: in 1988, the third prize in Kaliningrad; in 2005, the second prize in Belgorod, in 2007, the first prizes in Obninsk, Tyumen and St. Petersburg .
He participated in an international cartoon contests in England, Sweden, Iran, Serbia, Slovakia, China, Germany, Brazil, Romania, etc.
His cartoons were published in many Russian periodicals.