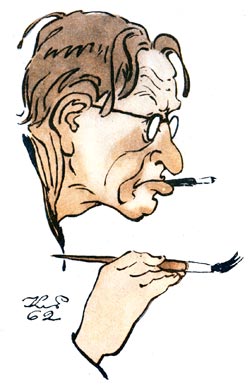 Eliseev studied at the Drawing School of the Society for the Encouragement of the Arts (1910–1914) under A. I. Tvorozhnikov, F. F. Buchgolz, A. A. Rylov, I. Bilibin, and then in Petrograd at the Free Art Workshops (1918) under V. V. Belyaev and at the Higher State Artistic and Technical Workshops (VKhUTEMAS) in Moscow under the guidance of I. N. Pavlov (1922–1923).
magazine Teatr i Iskusstvo (“Theatre and Art”)

Eliseev lived in St. Petersburg (Petrograd), since early 1920s — in Moscow. Since 1910s he worked in the field of magazine graphic art. Eliseev performed satirical drawings for newspapers and magazines Rech (“Speech”), Peterburgsky Zhurnal (“St. Petersburg Magazine”), Teatr I Iskusstvo (“Theatre and Art”). Since early 1920s Eliseev created caricatures on political and social themes for Moscow newspapers Gudok (“Whistle”, 1922–1968), Prozhektor (“Searchlight”, 1923–1935), Begemot (“Hippopotamus”, 1924–1928), Krokodil (“Crocodile”, 1924–1968) and others. During the Great Patriotic War, Eliseev worked for the magazine Frontovoy Yumor (“Frontline Humor”, 1941–1945). He also headed the studio of caricaturists under the magazine Krokodil in 1959–1961.

In 1910s Eliseev made his debut as a scene-designer. In 1911–1917 he worked as an actor and scene-designer for the cabaret theatres Troitsky and Liteyniy in St. Petersburg (Petrograd). Since 1920s he created scene and costume designs for the First Belarusian Drama Theatre in Minsk. He designed productions The Lower Depths by A. M. Gorky (1920, together with S. M. Eisenstein), Dream on a Barrow by Y. Kupala and others. Since 1930s he collaborated with the studio Mosfilm; he also was a costume designer of films Alexander Nevsky by S. M. Eisenstein (1938), Lenin in 1918 by M. I. Romm (1939). In his last years he worked as a designer of Moscow Circus performances.

In 1945 Eliseev was conferred the title of Honored Artist of the RSFSR (Russian Soviet Federative Socialist Republic) for his services in the field of Soviet art satire.

Works by Konstantin Eliseev are in many museum and private collections.