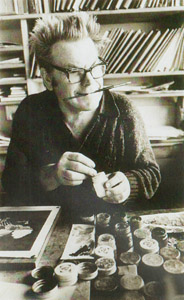 He was born on April 15, 1930.
National Artist of Russia. Master of book graphics.
He studied at the Moscow Polygraphic Institute (1948-1952). From that he started his creative work. He worked as a cartoonist, illustrator, a theatre artist. Before 1970 he created his works in a collaboration with the artist M.A. Skobelev.
Cartoons and satirical drawings by Anatoly Yeliseyev were published in the Krokodil magazine and other periodicals. He constantly contributed to the Murzilka and the Veselye Kartinki (Funny Pictures) children’s magazines. Eliseev illustrated a lot of children’s books.
The artist’s works were exhibited at a Moscow, republican and all-Union exhibitions and at an exhibitions of Soviet book art abroad (in Canada, Czechoslovakia, Poland and other countries).
A. Eliseev received the first degree diploma in the All-Russian competition “The Art of the Book of 1967” for S. Marshak “Mail” (1967), the second degree diploma in the All-Russian competition “The Best Book of 1965” for V. Mayakovsky “Whatever page you look at, There’s an Elephant or a Lioness” (1965), the second-degree diploma in the All-Union competition “Art design and printing in 1971” for E. Raspe “The Adventures of Baron Munchausen” (1971)
http://www.bookgrafik.ru