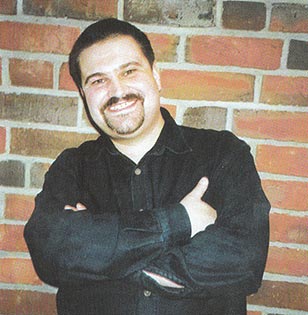 He was born in 1964 in Moscow.
He studied at the Moscow Art College in memory of 1905 on the department of industrial graphics.
Member of the Moscow Union of Artists since 1989.
He was engaged in book illustration, caricature and easel graphics.
Since 1977, he has collaborated with the book publishers “Children’s Literature”, “Little Boy”, “SATUKUSTANNUS” (Finland), “KARTO” (Finland), etc., as well as the magazines “Murzilka”, “Funny Pictures”, “Crocodile” “Theater”, “Health”, etc.
Participant and laureate of many all-Union and international exhibitions and competitions.
In 1988, at the international exhibition “War of War” in Bulgaria was awarded the first prize.
In 1988, at the 3 rd Interrepublican exhibition of caricatures in Riga, was awarded the prize of the Committee of Youth Organizations.
In 1989 – the third prize at the exhibition of the cartoon “Literary Hero” in Moscow.
In 1991 he received the Grand Prix of the international cartoon competition in Belgium, as well as the first prize at the international competition “Music”.
In 1993 – the first prize at the II International Festival of drawings for the press in Brazil.
The artist’s works are in private collections in many countries of the world, as well as in the permanent exhibition of the International Museum of Laughter in Gabrovo and in the collection of the Museum of Contemporary Art of the Institute of Jewish Culture named after Marc Chagall in Brazil.
Personal exhibitions:
Gallery “Art Leonardo”, 1990, Finland.
Gallery “Cranach Haus”, 1992, Germany.
Galleria Nystron, 1992, Finland.
Gallerie “Windel”, 1993, Germany.
“Municipal Hall of Porto Alegre”, 1993, Brazil.
Galleria “Valkoinen Huone”, 1993, Finand.
“Mary’s Gallery”, 1994, Moscow.
Gallery “Mosaico”, 1994, Brazil.
Central House of Artists, 1995, Moscow.
Center of Culture “Ostozhye”, 1996, Moscow.