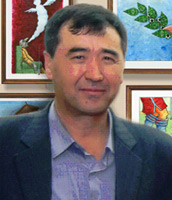 He was born in 1958 in the village of Telov, Becharik district, Ferghana region.
He graduated from Tashkent State Pedagogical Institute, Art and Graphic Department in 1994.
The first publication in 1991 in the satirical magazine “Mushtum”
The works are published in the national newspapers and magazines.
He worked as a tractor driver, driver, salesman, gas station operator, etc.
From 1992 to 1995, he worked as a teacher in drawing in high school
From 1996 to 1997, he worked as an artist in the magazine “Mushtum”
From 1997 to 2003, he worked as an artist-designer in the Humorous Studio “Uzteleradiocompany”
In 2003, he was a Member of the Jury of the 2nd International Cartoon Contest in China.
Participant in more than 250 international cartoon contests.
Held a solo exhibition in Krushevac (Serbia) in 2007.
Member of the Union of Artists of Uzbekistan.