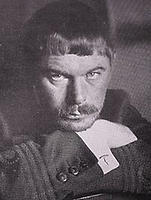 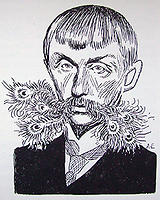 Swedish painter, cartoonist and author born in Smaland, Sweden, in 1869. More than any other. Albert Engstrom has most fully shown the innermost human characteristics and impact of the Swedish people. In a brilliant way his work has succeeded in laying bare the desires of the country, good or bad. and one common trait throughout is his sympathy and respect for the free individual, and for all human freedom.

Engstrom studied Greek and Latin at the University of Uppsala. There he learned the importance of the classical languages and developed into a brilliant, literary stylist. Few of the world’s greatest artists have succeeded to the same extent in combining the drawn and the written into a sublime unity. A director of the Painting School Valand in Goteborg saw his talent and encouraged him to go to Stockholm to pursue a career as a cartoonist. There he worked for the humor magazine Sondags-Nisse from 1894 to 1896, until his friends helped him start the magazine Strix and the foundation for his art and books was laid. Though a bohemian. he worked steadily and hard and obtained a respected position in all the leading circles.

Engstroms characters’ ease in relating to each other – whether they are drinking pals, aristocrats, intellectuals or financial wizards – is seen through a razor-sharp eye and an attentive ear. Typical is the situation where the family counsel in a lower-nobility family considers securing a mistress for the oldest, unmarried squire. The grandmother, who with age has become somewhat prejudiced, exclaims, “Might it then at least be a believing woman!”

Engstrom’s well-developed instinct for language was always perfect, in dialogue as well as in thought. In Scandinavia he is an institution copied by many but never surpassed. He became a professor at the Academy of Art. one of D Adotons (“The Eighteen”) honorable doctors, and was the recipient of countless honors and titles. He died in 1940.