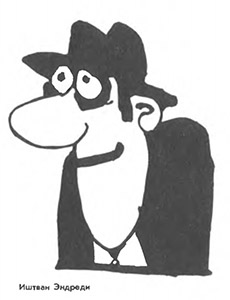 He was born in 1920 in Cluj (modern Romania).
He received his art education in Budapest, in the studio of Tibor Halle, and then at the Special School of Graphics of Almosh Yashik.
During the war and several years after the liberation of Hungary, he was interrupted by accidental earnings.
At the same time he continued to draw, sent his drawings to the newspaper “Pest News” and the satirical magazine “Free Mouth”.
Later he became an employee of the journal of the Trade Union of Postal Workers and the Journal of the Association of Hungarian Trade Unions Trud.
After 1956, he regularly worked in youth and children’s magazines Pioneer, Koster, Medved, illustrated books for children and youth, for which he was awarded the honorary badge of the Hungarian Komsomol “The Golden Wreath”.
From 1965 to 1982 all his time and thoughts belong to “Ludash Mathi”.
I took part in many group exhibitions, in 1983 my personal exhibition was held in Budapest in the club “Andor Gabor”.

“We are visiting artists of the Hungarian satirical magazine” Ludash Math “series” Masters of the caricature of the socialist countries.”