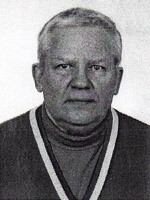 He graduated from the Higher Military School and the Estonian Agricultural Academy.
He worked in the Soviet party organs.
Published in the central and republican media.
A participant in the International and domestic cartoon contests.
Some works are in the funds of the Museum of Cartoon in Gabrovo (Bulgaria).
Cartoonist of the newspaper MEIE MAA and OMA SAAR 1993 – 2006