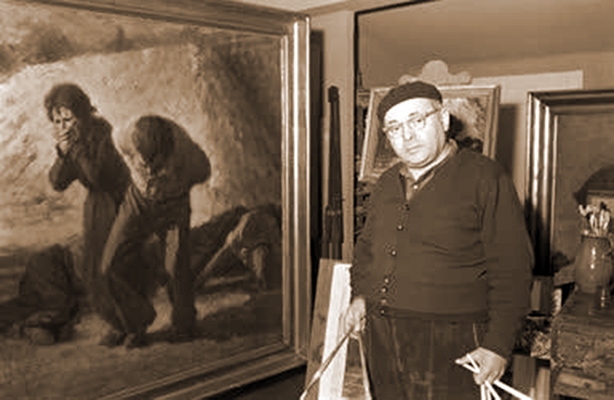 In 1915 he studied with Schlikh-Nikolson. During the Soviet Republic, he entered the studio of fine arts “Proletar”, where he was trained by such famous artists as Bela Witz and Jozsef Nemes-Lampert. In 1918 he became a member of the KMP. In 1920 he emigrated to Vienna. In 1921, he attended the Youth International in Moscow, and then studied for several months with El Lisitsky. In 1922 he left for Berlin, where he was an employee of the youth union. In 1923 he went to Paris. He returned home in 1924 and was arrested. After his release in 1925, he lived again in Germany, where he became a member of the German Communist Party. That’s when he appeared with his cartoons. In 1933, when Hitler came to power, he was forced to emigrate to Moscow. In 1934, with his poster “10 years without Lenin”, he won a competition for the 10th anniversary of Lenin’s death. From 1934 to 1937, he was Deputy secretary and then secretary of the International Association of Art Painters. In 1937, he became a member of the Board of the Moscow Association of Artists. In 1944, the Red Army returned to Hungary as a soldier. In 1948, he was appointed director of the Museum of Applied Arts. Since 1949, he taught at the Hungarian College of Fine Arts, where he headed the Department of Graphics. His famous students were, for example, graphic artist Kalman Chokhani, animal painter and graphic artist Pal Chergezan. He made a lot of posters.

The first years of his painting were defined by an avant-garde approach and a constructivist view. However, later, because of his faith in the labor movement, he abandoned these stylistic tendencies. Then he painted his paintings in a realistic style. It was followed by a descriptive presentation. His past of the labor movement also defined his art, the poverty of the worker and displayed the shy worker on his canvases, ridiculing the “class enemy” in his graphics and posters. His drawings are characterized by a heroic depiction of the work. He also painted idyllic genre scenes, his portraits were faithful examples of Soviet socialist realism.