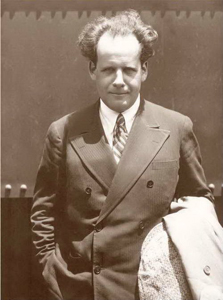 He was born on January 10, 1898 in Riga. A student of V.E. Meyerhold, Eisenstein developed new principles of organizing dramatic action in theatrical productions, bringing the performing arts closer to the circus and the stage. The search for a modern cinematic language — the discovery of new possibilities of editing, rhythm, close—up, foreshortening – was carried out in a series of historical and revolutionary paintings shot at Mosfilm: “Strike” (1925), “Battleship Potemkin” (1925), “October” (1927, together with G.V. Alexandrov). Eisenstein achieved a synthesis of action and image, words and music. His style is characterized by metaphoricity, expression, and a craving for symbolic imagery. In the 1930s, Eisenstein’s works were repeatedly subjected to official ideological criticism. After the patriotic painting “Alexander Nevsky” (1938) Eisenstein directed Ivan the Terrible (1945, the 2nd series was released in 1958, the 3rd is not finished). The historical concept proposed by Eisenstein was in contradiction with the official interpretation of the personality of Ivan the Terrible of those years. On September 4, 1946, the Central Committee of the CPSU (b) adopted a resolution sharply criticizing the second series of Sergei Eisenstein’s film Ivan the Terrible for distorting Russian history and the images of its figures. Eisenstein comprehended his creative experience in a number of theoretical works.

The path to cinema.

He was born in the family of a Riga civil engineer and architect, a full state councilor Mikhail Osipovich Eisenstein and Yulia Ivanovna (nee Konetskaya). He was the only son.

Sergey received a traditional bourgeois upbringing. he drew beautifully, read a lot, was fond of theater. From early childhood he studied three foreign languages at once.

However, his childhood was not cloudless: his father and mother often quarreled. In 1912, his parents officially divorced, and by court order, the boy stayed with his father.

In 1915, Sergei graduated from the Riga Real School, then studied for three years at the Petrograd Institute of Civil Engineers. Without finishing his studies, he volunteered for the Red Army, was a construction technician on the Western Front, an artist at the political administration, participated in amateur activities as an artist, actor and director.

In the fall of 1920, Eisenstein was sent to the Academy of the General Staff for translation courses (Japanese language class of the Department of Oriental Languages), but soon he left for the theater. Eisenstein entered the first workers’ theater of the Proletkult as an artist, where in 1921 he designed the play “The Mexican” by J. London.

In 1921-1922, Eisenstein was a listener and trainee director of the State Higher Directing Workshops under the direction of V.E. Meyerhold. He designed performances with S.I. Yutkevich at the Mastfor Theater (N.M. Foregger’s workshop) and at the Central Educational Theater. Since 1923, Eisenstein led the theater workshops of the Proletkult, taught various disciplines there (from aesthetics to acrobatics), many of his students (G.V. Alexandrov, M.M. Strauch, Y.S. Glizer, I.A. Pyriev) subsequently became prominent figures of theater and cinema.

At the same time, he became close to the left of V.V. Mayakovsky, in whose magazine Eisenstein published a creative manifesto “Installation of attractions” (1923). The manifesto justified the method of influencing the public with the help of circus, variety techniques, as well as posters and journalism in performances staged by Eisenstein in 1923-1924: “The Sage” (according to A.N. Ostrovsky, “There is enough simplicity for every sage”, later he shot the film “Glumov’s Diary”), “Do you hear, Moscow” and “Gas Masks” (based on the plays of S.M. Tretyakov).

All of Eisenstein’s early experiments and audacious theoretical statements aimed at scrapping traditional theatrical thinking actually testified to the fact that he was becoming cramped in the conventional art of the theatrical stage, which he deliberately made even more conventional. Therefore, the director’s transition to cinema together with his team, rapprochement with the leading cinematographers of those years (L.V. Kuleshov, D. Vertov, E.I. Shub, L.L. Obolensky), studying the experience of foreign cinema contributed to his rapid development of a new art.

In 1924, Eisenstein released his first cinematic masterpiece, The Strike. In this innovative tape, paradoxically combining the almost chronicling of events (largely thanks to the cameraman E.K. Tisset, who had experience shooting front-line newsreels) and the conventionality of eccentric gags performed by typically selected actors, the theory of “installation of attractions” was more meaningfully and purposefully applied. The spectacular combination of the incongruous within one frame was complemented by a metaphorical change of frames, that is, a montage capable of generating a new meaning and becoming a means of the author’s transformation of reality.

Eisenstein was one of the first in the world cinema to realize and put into practice the fundamental principle of cinema itself, initially inclined to “fabricating dreams”, only giving it the necessary historical context of a revolutionary change in the world. The private story of one of the strikes at a Russian factory was masterfully conveyed by the director, with stunning cinematic details, with impressive and even shockingly affecting scenes of the massacre of workers, and was perceived as a call for the immediate reconstruction of the world. The idea of a strike was conceived on a planetary scale, and cinema turned out to be a powerful way of “mounting attractions” in the sphere of influence and manipulation of the audience masses.

A year later, in 1925, “Battleship Potemkin” was released on the screens, created by the same method and with a number of exclusively “attractive moments” (a textbook episode of the shooting on the Potemkin Stairs in Odessa). However, thematically and stylistically, “Battleship” turned out to be more seasoned and cleared of eccentric overlaps and screaming metaphorism of details. The symbolism hidden inside the frame and the montage transition exploding with a new meaning made the three-frame episode fixing the “jump” of the marble lion a classic. The mutiny of the sailors on the Potemkin, which turned into a social conflict, turned out, thanks to Eisenstein’s film, to be charged with internal energy of such strength that it produced a truly rebellious effect and was banned for demonstration in a number of Western countries. Thanks to Eisenstein and the Soviet school of montage-shaped cinematography of the 1920s, cinema really became an art affecting millions of people in different countries.

The next two films — “October” (1927) and “Old and New” (1929) — reflect the next stage in the director’s work, when he logically came from the idea of “mounting attractions” to a kind of “montage of thoughts”, framed in the theory of “intellectual cinema” and implemented in a number of complicated metaphors. “October” completed the conditional revolutionary film trilogy of Eisenstein, started by “Strike” and “Battleship”Potemkin.” Despite the fact that these films were stylistically close to the chronicle, the director “rewrote” the event canvas of the October Revolution. “October” can be considered in world cinema one of the first examples of the embodiment on the screen of the “second reality”, which seems more authentic than the present.

Turning in the film “The Old and the New” to the life of the Soviet village on the eve of the great turning point, when the implementation of Stalin’s collectivization plan began, Eisenstein, as in the two-time attempt to stage “Bezhina Luga” (1935-1937), enters into a significant contradiction between his method and reality. The contemporary artist’s world turned out to be less malleable for creative embodiment on the screen, not only because of the lack of historical distance. The principle of revolutionary mythological dissection of reality, cherished by Eisenstein, unwittingly began to compete with the “general line” of the leader himself.

Within the framework of socialist realism.

In 1929, Eisenstein, along with Alexandrov and Tisset, was sent abroad (first to Western Europe, and then to the USA). In the spring of 1930, once in Hollywood, the director accepted the offer of Paramount Studios to shoot the romantic and expressive saga “Long live Mexico”. Due to insufficient funding and urgent requests to return home, the film was not finished. Upon his return to Moscow in 1932, Eisenstein was forced to concentrate his activities exclusively on theoretical and pedagogical work at the Institute of Cinematography. All this was an attempt to develop their own “inner monologue”, with the help of which it would be possible to exist in art in the conditions of the rigid framework of socialist realism imposed from above.

Against this background, “Alexander Nevsky” (1938, Stalin Prize, 1941), realized in accordance with the genre of biographical patriotic film favored by the leader, could seem like a certain concession of Eisenstein. The colossal success of the film, shot on the eve of the Second World War, testified to the coincidence of the interests of the director and the moods of not only the ruler, but also the masses of the audience. It is impossible to separate from the director’s embodiment and the bright visual solution of the operator Tisset, as well as the amazing emotional impact of the musical accompaniment of S.S. Prokofiev. “Alexander Nevsky”, having appeared, a milestone in creativity

Eisenstein, marked a sharp change in the director of his artistic method.

In the last decade of his life (1938-1948), Eisenstein came to a new cinema, which only at the turn of the 1950s and 1960s would begin to penetrate into the depths of human consciousness, intellectually and philosophically reflect reality not in the external, but in the internal dimension. The rudiments of intra-frame editing and transmission on the screen of the hero’s train of thought in the historical tragedy “Ivan the Terrible” (first series, 1945, Stalin Prize 1946; the second series was banned and released only in 1958; the filming of the third was stopped), especially in the second series, does not contradict the discoveries in the inter-frame editing and the offensive rethinking of reality in the early masterpieces “Strike” and “Battleship Potemkin”. But over time and under the influence of the dramatic events of history, Eisenstein’s idea of the essence of cinema changed, deepening and improving. The theorist and practitioner of cinema Eisenstein in the last period of his work begins to understand that cinema must learn to explain and comprehend reality in historical and dialectical development. But the main idea of “Ivan the Terrible” — the idea of the tragic reckoning of the ruler for the crimes committed during the struggle for power was subjected to scathing criticism. The film was not saved by the excellent acting works (N.K. Cherkasov, A.M. Buchma, S.G. Birman, M.I. Zharov), nor by the innovative visual solution (one of the scenes in the black-and-white picture was shot in color), nor by Prokofiev’s music. A sharp shout of official criticism followed, and Eisenstein was categorically asked to rework the film. The director was seriously worried about the fate of his brainchild, the heart disease sharply worsened, and he died suddenly, barely stepping over his fifty-year milestone. Eisenstein’s influence on world cinema is much broader and deeper than it was previously imagined by Soviet critics, who were looking for a trace of only the external, ideologically pathos impact of his films. The director’s innovation in the field of film form attracts completely different political views and artistic preferences of domestic and foreign cinema figures.

in the archive of the master, they confirm his passion for drawing cartoons, which gives the editors reason to consider him a cartoonist as well.