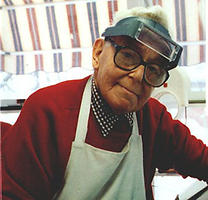 Born in Islington, London, on September 29, 1916. Carl Giles, O.B.E., was the last and perhaps most popular of the great British newspaper cartoonists. His education was of the Council School variety that he has im­mortalized in his cartoons of Chalky and the kids. His family was from ancient East Anglian stock, and the little black grandma of his cartoons was autobiographi­cal. At 14 he left school to become an office boy in Wardour Street film offices, and with his native ability to draw and fib, he talked himself into a job as an animator with an advertising-short film company. When Roland Davies began to produce his newspaper strip Come On Steve! as an animated series from a studio in Ipswich, Giles joined him: Giles was the only experienced animator on the team!

Giles’s signature to cartoons and strips first began to appear in the Sunday newspaper Reynolds’ News during World War II (1940). He drew a weekly topical panel and the pantomime strip Young Ernie. He joined the Beaverbrook Newspapers in 1943, alternating with Sidney Strube in the Daily Express and weekly in the Sunday Express. Here he established his style and regular characters – the Cockney family, the Cockney schoolkids, the wealthy GI’s, etc. His sense of humor, present in every drawing, was a new characteristic in the newspaper cartoon and quickly established him at the top of his profession.

Arthur Christiansen, the executive editor of Express Newspapers who “spotted” Giles, wrote in an introduc­tion to one of Giles’s annual collections: “Giles does not caricature. He does not fake. He does not invent. He draws real buildings, real pubs, real railway stations…. And he draws from the largest and finest selection of models that any artist could wish – the British people.” Her Majesty the Queen, awarding Giles the Order of the British Empire in 1959, said: “I might be accused of exaggeration if I said that the Englishman’s ability to laugh at himself has won us the British Empire, but I am sure that it has contributed a good deal to keeping it together.”