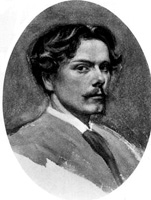 George du Maurier was born in Paris, the son of Louis-Mathurin du Maurier and Ellen Clarke, daughter of Regency courtesan Mary Anne Clarke. He was brought up to believe that his aristocratic grandparents fled France during the Revolution, leaving vast estates behind in France, to live in England as émigrés. However, du Maurier’s grandfather, Robert-Mathurin Busson, was actually a tradesman who left Paris in 1789 to avoid fraud charges, and later changed the family name to du Maurier.[1]

Du Maurier studied art in Paris, and moved to Antwerp, Belgium, where he lost vision in his left eye. He consulted an oculist in Düsseldorf, Germany, where he met his wife, Emma Wightwick. He followed her family to London, where he married Emma in 1863. The couple settled in Hampstead around 1877, first in Church Row and later at New Grove House.[2] They had five children: Beatrix (known as Trixy), Guy, Sylvia, Marie Louise (known as May) and Gerald.

He became a member of the staff of the British satirical magazine Punch in 1865, drawing two cartoons a week. His most common targets were the affected manners of Victorian society, the bourgeoisie and members of Britain’s growing Middle Class in particular. His most enduringly famous cartoon, True Humility, was the origin of the expressions “good in parts” and “a curate’s egg“. (In the caption, a bishop addresses a curate [a very humble class of clergyman] whom he has condescended to invite to breakfast: “I’m afraid you’ve got a bad egg, Mr. Jones.” The curate replies, “Oh no, my Lord, I assure you – parts of it are excellent!”) In an earlier (1884) cartoon, du Maurier had coined the expression “bedside manner” by which he satirized actual medical skill. Another of du Maurier’s notable cartoons was of a videophone conversation in 1879, using a device he called “Edison‘s telephonoscope“.

In addition to producing black-and-white drawings for Punch, du Maurier created illustrations for several other popular periodicals: Harper’s, The Graphic, The Illustrated Times, The Cornhill Magazine, and the religious periodical Good Words.[3] Furthermore, he did illustrations for the serialization of Charles Warren Adams‘s The Notting Hill Mystery, which is thought to be the first detective story of novel length to have appeared in English.[4] Among several other novels he illustrated was Misunderstood by Florence Montgomery in 1873.[5]