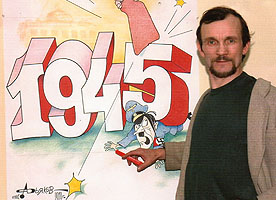 He was born on August 17, 1963 in the city of Berezniki, Perm region.
He graduated from the People’s University of Arts, majoring as an artist-designer (1989).
Worked in the newspapers “Dawn of Youth”, “Saratov News”, “KP-Saratov”, “New Times in Saratov” (1991-2011).
The first cartoon was published on April 1, 1989 in the newspaper “Dawn of Youth”.
Participated in more than 50 international and Russian cartoon contests.
He was published in the republican and central mass media.
Prizewinner of cartoon contests of the newspaper “Komsomolskaya Pravda”, magazine “Crocodile”.
Laureate of competitions in Italy, Japan, Russia.
Held 25 personal exhibitions from 1990 to 2010.
The author’s collection of cartoons “Smile, Saratov. Ki. ”
Employee of the newspaper “New Times in Saratov”.
Member of the Union of Journalists of Russia.
During the last 5 years, she holds regular master classes on caricatures for children
Children’s home N 3 in the city of Khvalynsk, Saratov region.