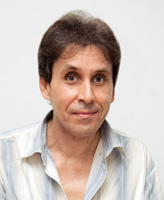 He was born on August 26, 1963 in Odessa.
In 1985 he graduated from the Odessa Polytechnic Institute, the machine-building faculty.
Then he worked as an engineer at the Kinotekhprom company. Since 1990 he is a head of the technical department.
His first cartoon was published in the Vechernya Odessa (Evening Odessa) newspaper in 1979 .
Since 1994 he worked as a layout designer and a cartoons in the Ukrainian Business News newspaper, since 1995 he is the main artist.
Since 2002 he workd as a designer in the Afisha of Odessa magazine.
His works were published in local, central and republican periodicals such as Izvestia, Komsomolskaya Pravda, “Speed-Info”, Kiev News, etc. he published more than 1000 cartoons.
Participated in more than 50 international and all-union cartoon contests.
Prize-winner of several cartoon contests such as Akyuan, Odessa, 1991 and Human Rights, Kiev, 2008, 2010.
Since 1990 he is a member of the Odessa cartoonists Club (later the Association of Odessa cartoonists).