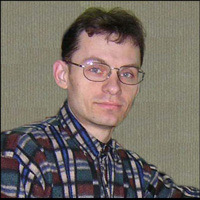 He was born on December 25, 1975 in Nizhny Novgorod.
Since childhood he was fond of drawing and music.
In 1982 he graduated from the artistic and musical (piano) school in Naro-Fominsk district.
Then he graduated from the musical school in Kaluga (trombone class). Since 2000, he is an artist of the newspapers such as 7 Chudes, Chudesny Scanword, Kaluzhsky Perekrestok where he started his way into cartoon.

He is a participant and a prize-winner in a various cartoon competitions.

Since 2006 he is a free artist. Also he is engaged in animation and works as a trombonist of the Philharmonic Orchestra in Kaluga.