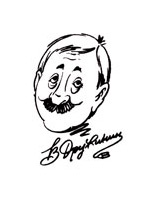 Born February 23, 1951 in the village of Kyzyl-Su, Krasnovodskaya region. Turkmenistan.
His first cartoon was published in the Tokmak republican humorous magazine in 1965 when he was just 14.

Since 1972 he lived in Zaporozhye, Ukraine. He worked as an artist in a cinema and on television in Krasnovodsk and Zaporozhye. Worked in the Komsomolets Zaporozhye newspaper from 1975 to 2002.

He was a chairman of the Carousel cartoonist club from 1983 to 1997.
In 2002, he moved to Moscow for work in the Komsomolskaya Pravda newspaper.
His works were published in the central press of Russia, as well as in China, Germany, the Czech Republic, Poland and Yugoslavia.
Since 1987 he is a participant of a numerous international and national competitions and exhibitions of cartoons.
A laureate of more than 130 international and domestic cartoon contests. He published over 4000 cartoons.

Member of the USSR Union of Artists.
Honored Artist of Ukraine.
The artist of the Komsomolskaya Pravda newspaper, Moscow.