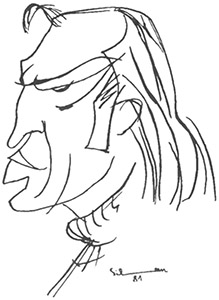 He was born on August 4, 1947. In 1967 he made his debut in the Urzika magazine. He held his first personal exhibition in 1976. Then his works were displayed at the cartoon exhibitions in the country and abroad and repeatedly awarded with a various prizes. In 1976 he won the highest award of the Academy of Fine Arts in Turkey. The last award was the prize of the La Stampa Italian newspaper (1982). He is a member of the Artists Union of the RAF.