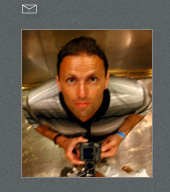 Cooperating with many periodicals as a cartoonist artist he became a laureate of the Moskovsky Komsomolets newspaper’s cartoon club in 1988 and next year he received the Great Incentive Award at the USSR cartoon exhibition. He was invited to the editorial office of the Arguments and Facts weekly newspaper.
He was awarded with the Prize by the Moscow Journalists Union in 1992 and with the Honorary Diploma “For the best journalistic work of the year” by the Journalists Union of Russia in 1993 .
In 2001, a series of his covers won the first prize among newspaper in the Cover of the Year annual contest. In 2003, one of his works was awarded with the The Singing Cover special prize, In 2006, with the prize at the Golden Lukich International Exhibition on ironic art.
He is a laureate of the Iskra national press award.
He published three collections of his works, held several solo exhibitions in Moscow, St. Petersburg, Kiev, Minsk, Frankfurt am Main and in small Russian towns.