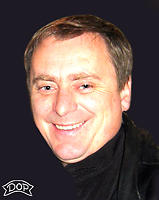 He was born on June 6, 1965 in Kiev.
He graduated from the technical school in 1984.
After serving in the army, since 1987 he worked as a car mechanic, then as a driver of MAZ in Kiev, then for 6 years he worked at the Kiev Art Glass Factory, he was a master of cutting crystal vases (from 1989 to 1995 when the factory was closed).
His first cartoon was published in the Segodnya (Today) Kiev newspaper in 1996.
Since that time, he drew more than 3,000 cartoons.
His works were published in the newspapers such as Segodnya, BB, Robitnycha Gazeta, Selskie vesti (Rural News), Interesnaya Gazeta (Interesting Newspaper), Krokodil v Ukraine (Crocodile in Ukraine(, Flirt, “Hochma” and in the magazines like Krokodil (Crocodile), Koleso smeha (The Wheel of Laughter) and Vokrug smeha (Around the Laughte” and also in America in the UFO magazine (California).
He participated in more than 6 international and several national cartoon competitions. Received 3 diplomas in a various cartoon contests.