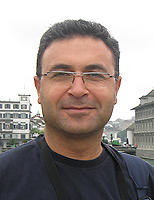 He has been drawing cartoon since 1985. His first cartoon was published in the Kılçık magazine in 1985. His consecutive works were published in the Gırgır, Limon, Çarşaf, Gümgüm, Akrep (Cypro), Hallo (Germany) magazines, and Cumhuriyet, Bulvar, Bizim Gazete, Milliyet, Birgün and Sabah newspapers. The artist continued drawing cartoons for Kılçık, Tıp Dünyası, Sendrom, Hiç, Fesat and Hekim Forumu magazines. He participated in a number of national and international competitions and was awarded with twelve prizes. He took part in many cartoon exhibitions. He held his first personal exhibition in 1991 at the Second Medical Fair in Ankara. In 1989 his first book “Where the sun doesn’t enter” was published. He draws medical illustrations besides his cartoons. He is married and a father of a twin boys. His works are published at medicalart.tripod.com.