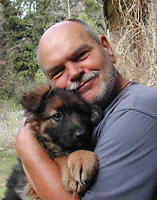 Was born in 1940, and graduated from the Moscow Polygraphic Institute. He is a book illustrator, painter and puppet film designer and director. He has designed and illustrated fiction and children s books, including Cotangent Puss’s Arithmetic Book by Giovanni Raboni, My Lion by Boris Zakhoder, The Adventures of Captain Wrungel by Andrei Nekrasov. Asar Eppel’s Storm, and The Growth Vitamin by Oleg Grigoryev. He contributes illustrations to a number of children’s magazines and the satirical weekly Krokodil. Dmitryuk has taken pan in Book Art exhibitions both in this country and abroad, and in the International Children’s Book Fair in Bologna (1987). His works are included in museums and private collections in this country.

Dmitryuk is an extraordinary artist; no definition will fit him. He illustrates books, perhaps, in the same way as Chagal or Soutine painted their canvases, destroying all the existing canons, but without realising it, like Braque or Picasso, who did not destroy, but strengthened them. He conveys his inner world visually in illustrations as a matter of course, unpretentiously and un importunately. He is carried away by literary fantasies, and with a hand well trained in the latest intricate techniques of contemporary art depicts various worlds, chock-full of houses, cars, animals and people. They are closely packed in pictures within pictures, where everything is confused. But everything is very interesting. And there is something there which is lacking in the book. What strange animals, resembling animal-like people! What strange people resembling nothing at all! What a bizarre grotesque! With a child’s accuracy, reinforced by contemporary art, Dmilryuk finds “wrong” proportions and creates confusión of space. His colours, which do not explode, but “model” this vivid myth, are bright and harmonious. The world of the book acquires a tactile texture and gives rise to a new image, which is both alive and extremely attractive.