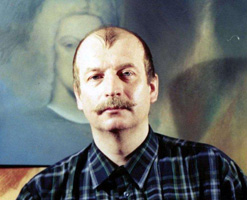 He was born on July 31, 1954 in Berlin.
He graduated in Architecture from the Moscow Architectural Institute in 1977.
He worked in the Department of Mosproject-2 as an architect until 1988.
His first cartoon was published in 1988 in the Sobesednik weekly. Published in the central media such as Kommersant, Russian Telegraph, Version, Izvestia, Fas, Conservative.
Works as a book and magazine illustrator, as well as engaged in easel graphics and painting.