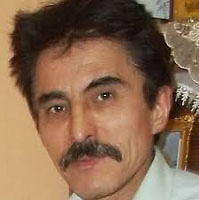 He was born in Polatli in 1960. He graduated from the Gazi University in 1985. He is a teacher
in a technical high school since 1986. He’s married with two
son and a daughter. He have been drawing pictures and cartoons from his childhood. His works such as paintings, watercoIors and cartoons were exhibited during 1983 -2002 (8 private exhibition,13 group exhibition).
His cartoons were published in some magazines.
He participated in a many competitions and an exhibition in Turkey and an International cartoon exhibitions (Japan, Argentina, Ukraine, Turkey, Brazil, Cyprus, Tanzania, Lithuania, Yugoslavia, Korea, Iran, Russia, Italy, Belgium. France, Holland) since 1997 year.
He published 11 storybooks for the children (writing and drawings). He wrote a humor short stories, poems, plays for the stage and radio. He composed 32 songs.
He was an actor in the Theatre of Turkish National Education Ministry for three years.
He sometimes acting in tv series films.