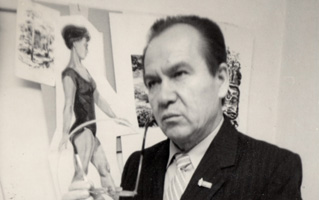 He was born on February 25, 1925.
His first cartoon was published in 1950.
He is a member of an international and national cartoon competitions since 1965.
A participant of exhibitions: the Exhibition of graphic artists, members of the Journalists Union in Moscow (1973); the International Exhibition in Lithuania (1985); the Exhibition in Omsk; the Exhibitions in Chelyabinsk (1993).
His works were published in the magazines such as Krokodil (Crocodile), Shmel (Bumblebee) as well as in all the central newspapers and the newspapers of the Kama region.
He published books of drawings and cartoons.